What tools do you need to bring to a DataDive? The next DataKind UK DataDive is taking place in two weeks time in London. I took part in one of the previous DataDives and I would highly recommend the experience for anyone with data science or analytical skills who wants to help charities use their data.

The DataDives take place over the course of a weekend and in that time you have to decide on a charity to work with, understand their data and goals, perform your analysis and present your results in a usable form. That’s a lot to get through in just over two days so it’s very important to be able to get up and running quickly with the analysis. I thought it might be useful to list the software and tools that I will be packing in my DataDive toolbelt this time around.

It looks like this is going to be a busy week. First up Noelle Sio, Alexander Kagoshima and I are presenting a webinar on Tuesday about our traffic analysis and prediction work. We talked about this topic at Strata Santa Clara but this webinar will take an extended look at the data, the challenges and the technology we used. You can sign up on the Pivotal website and the recording will be available afterwards.
February 25, 2014

View of London from Level 39, the venue for PyData in Canary Wharf Last weekend the first European PyData event took place in London’s Canary Wharf. Having been really impressed with the last conference in New York in November, I was really looking forward to having PyData closer to home. With lots of great talks on subjects from Machine Learning to Pharmaceutical drug discovery, the weekend did not disappoint. Ian Ozsvald has written up a good description of all the different activities.
February 14, 2014

How to Beat the Traffic (at Strata)

This week I had the opportunity to attend and speak at one of the biggest Big Data conferences of the year. The Strata conferences run by O’Reilly have been running for the last few years and in many ways have driven the awareness and adoption of data science and predictive analytics. My colleagues Alexander Kagoshima and Noelle Sio, and I talked about recent work we’ve been doing on how to use machine learning techniques to understand traffic flows in major cities and predict when travel disruptions will end.
January 24, 2014

Beat the Traffic at Strata 2014

The next few weeks are going to be busy and one of the reasons is that I am fortunate enough to be speaking at this year’s Santa Clara edition of Strata. Alexander Kagoshima, Noelle Sio and I are talking in the Machine Data session on Thursday 13th February about “Driving the Future of Smart Cities - How to Beat the Traffic”. It’s the last parallel talk of the day, so perfect timing for figuring out how to navigate the Bay Area traffic on the way home.
January 13, 2014

PyData: From New York to London

I have been using the Python data ecosystem (consisting of NumPy, Matplotlib, Pandas, and many more) for a few years now, so I was really glad to be able to attend the conference dedicated to all things Python data related, PyData, in its latest incarnation in New York last November. PyData has been running roughly three times a year since 2012 when the first event was held in the Google Campus in Mountain View.
December 31, 2013

I thought now would be a good time to reflect on 2013 and the changes that have happened in my life. Officially I have now been out of academia for a year. My postdoc contract ended at the end of 2012, and while I stayed on at QMUL as a visiting researcher, I took the opportunity to travel for a few months with my wife, before setting out to find a new job.
May 2, 2013

Any rugby fan in the “home” countries this week has been analysing the squad announcement for this year’s British and Irish Lions tour of Australia. Warren Gatland has chosen his 37 man squad to bring down under and unsurprisingly there are quite a few Welshman in the list. Despite losing to Ireland in the first round of the Six Nations this year (yay!), Wales were able to come storming back to win the championship for the second year running.

But how much did this performance impress Warren Gatland? Well out of 37 players chosen this week, 15 are Welsh, overhauling England with 10, Ireland with 9 and Scotland with a token contribution of 3 players. Percentage-wise that’s 40.5% Welsh,  27.0% English, 24.3% Irish and only 8.1% Scottish.

To illustrate this dominance I thought it might be interesting to create a cartogram, a map in which the land area of the familiar regions has been replaced with some other variable, here the squad composition. Cartograms have become increasingly popular in the last few years, in particular to illustrate disparities on a world scale. In all these cases the comparison is inherently with the standard land area of the usual map with which we are all at least familiar.

So here is what the British Isles/these islands/British and Irish Isles looks like when transformed using the Lions 2013 Squad composition: 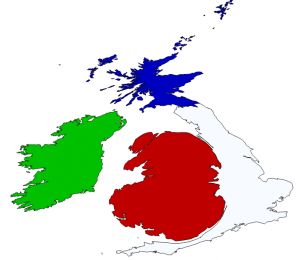 As you can see Wales is disproportionately represented in the Lions squad as we might have expected. Ireland seems to be pulling about right for its size given the relative lack of distortion but clearly England is not contributing as many players as it might (not even their captain made it!).

At a London Cosmology Discussion Meeting last week, representatives of the London cosmology groups discussed ways of increasing collaboration and cooperation between the groups and how to utilize the various skills in London in a more coherent way. One of the main outcomes of this meeting was a consensus to form a ‘virtual’ institute to act as an umbrella organisation for the collaboration efforts. This London Institute of Cosmology would initially act as a clearing house for event information, especially seminars in the groups, information about research visitors to London, and provide a structure for possible funding applications.
October 3, 2012

Last weekend I took part in the first London DataDive, a charitable event organised by DataKind, who previously organised similar events across the US. The basic premise is that charities have collected large amounts of data, on donors, fund-raising and the actual care, help or interventions they provide. Without costly analysts to sort through and make sense of the data, it goes unused, providing little or no value to the organisation.